—“Let food be thy medicine and medicine be thy food.” – 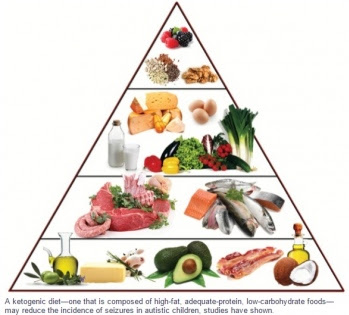 In front of about 100 attendees in January at Clinical Nutrition Week, hosted by the American Society for Parenteral and Enteral Nutrition (A.S.P.E.N.), David Suskind, MD, quoted the ancient Greek physician, Hippocrates. The words still ring true—maybe now more than ever.

Dr. Suskind, a professor of pediatrics in the Division of Gastroenterology, Hepatology and Nutrition at Seattle Children’s Hospital and the University of Washington, alongside three other speakers, highlighted mounting evidence for the potential of nutrition therapy to complement medications in alleviating symptoms associated with inflammatory bowel disease (IBD), autism and epilepsy.

“For all of these conditions, patients and families are greatly interested in the role that diet can play in the management of disease,” said Dale Lee, MD, an attending physician in the Division of Gastroenterology, Hepatology and Nutrition at Seattle Children’s Hospital and the University of Washington, and moderator of the session. “In IBD in particular, there are many opportunities to better understand how diet is associated with disease and how diet can be used for therapy.”

About 1.5 million people in the United States suffer from IBD, with approximately one-fourth of new diagnoses among patients younger than 21 years of age, Dr. Suskind said. He added his suspicion that the rising use of antibiotics in the 20th century may have helped spur a steady rise in the number of IBD cases. “We know antibiotics work phenomenally well for infections. But they also affect the fecal microbiome,” said Dr. Suskind, adding that pediatric and adult studies have linked IBD to antibiotic use (Pediatrics 2012;130:e794-e803).
image

Also coinciding with IBD’s emergence have been changes in the typical Western diet—from what we eat to what’s in our food. “Certain bacteria like certain types of food,” he added. Even food additives have been shown to affect the 100 trillion or so bacteria that make up our microbiome (PLoS One 2012;7:e52132).

“Medicine, for the most part, has focused on the immune system as the primary way to treat IBD. Medication works, but it’s not perfect. A lot of people don’t respond,” Dr. Suskind said. “We’ve been looking to see if we can manipulate the microbiome through diet to achieve efficacy. What we’ve found is, yes, we can.”

He recalled patients who have gone from active disease to clinical remission of IBD, both ulcerative colitis and Crohn’s disease. More specifically, Dr. Suskind pointed to the promise of the specific carbohydrate diet. With a history dating back almost 100 years, the diet removes all grain and milk, with the exceptions of yogurt fermented for more than 24 hours and hard cheese. It also avoids all sugars except for honey, and allows vegetables, fruits and meat. “Our research shows that this diet does change the microbiome,” said Dr. Suskind, whose team is currently writing up results from a prospective study of IBD patients.

Cade Nylund, MD, a pediatric gastroenterologist at the F. Edward Hébert School of Medicine at the Uniformed Services University, in Bethesda, Md., and session speaker, underscored the benefits of the diet in treating the IBD frequently accompanying autism. He also discussed how children with autism are prone to other nutrition-related conditions such as obesity, malnutrition and food allergies, as well as feeding disorders, recalling a 5-year-old autistic boy who chose to eat only brand-specific macaroni and cheese, and brand-, flavor- and color-specific fish crackers. The case is not unusual. Children with autism frequently consume not only excess calories but also insufficient micronutrients such as iron and vitamin D (Res Dev Disabil 2015;38:1-6). Adults face troubles of their own. A recently published study found that among 92 adult patients with autism, 45% were either obese or overweight and one in 10 had diabetes (Autism 2015 Jul 10. [Epub ahead of print]).
image
A ketogenic diet—one that is composed of high-fat, adequate-protein, low-carbohydrate foods— may reduce the incidence of seizures in autistic children, studies have shown.

“Prevention is key” to fending off malnutrition, Dr. Nylund said. He recommended that children with autism get “referred to a registered dietitian early and have special guidance and dietary intervention as part of their long-term management.” He further noted that children with autism face up to 12 times the risk for being admitted to the hospital with seizure disorders compared with nonautistic children, making them potential candidates for the ketogenic diet. The high-fat, adequate-protein, low-carbohydrate diet has “demonstrated clear efficacy” for seizures, according to Dr. Lee.

Despite the potential power in targeting its comorbidities, Dr. Nylund said “there is insufficient evidence that any specific diet will actually treat the neurodevelopment symptoms of autism.”

Martha Herbert, MD, a pediatric neurologist at Massachusetts General Hospital, in Boston, suggested that early evidence may still at least hint at that potential. “Appropriate research into the links between diet and the brain is just starting,” said Dr. Herbert, who wasn’t part of the session and whose research focuses on whole-body approaches to the brain. “When you change the diet, you do things to the brain across a number of different levels,” she added. A different fatty acid profile in food, she explained, sends different building blocks for brain cells to use, which in turn can affect membrane function and improve the efficiency of neural synapses.

In 2013, Dr. Herbert co-authored a case study of a patient with autism and epilepsy (J Child Neurol 2013;28:975-982). Dani, now 17 years old, went on a gluten- and casein-free diet at about age 14. Then when seizures struck her during puberty, her doctors further refined her diet to also be ketogenic. “She soon became seizure-free, lost a ton of weight and her cognition went through the roof,” said Julie Buckley, MD, a pediatrician at Pediatric Partners of Ponte Vedra, in Florida, and study co-author.

“I’ve learned over our journey that food truly is medicine,” Dr. Buckley said.

Drs. Lee, Nylund, Herbert and Buckley reported no relevant financial conflicts of interest. Dr. Suskind reported that he will be publishing a patient inflammatory bowel disease handbook for others to use in the future.

Artist - Entrepreneur Owner, Bitte Artisanal Catering
View all posts by WMVN →
This entry was posted in Uncategorized. Bookmark the permalink.